1979.
This school woodwork project conveys Kim’s early aptitude towards creating, which was encouraged due to his families belief in making rather than buying. 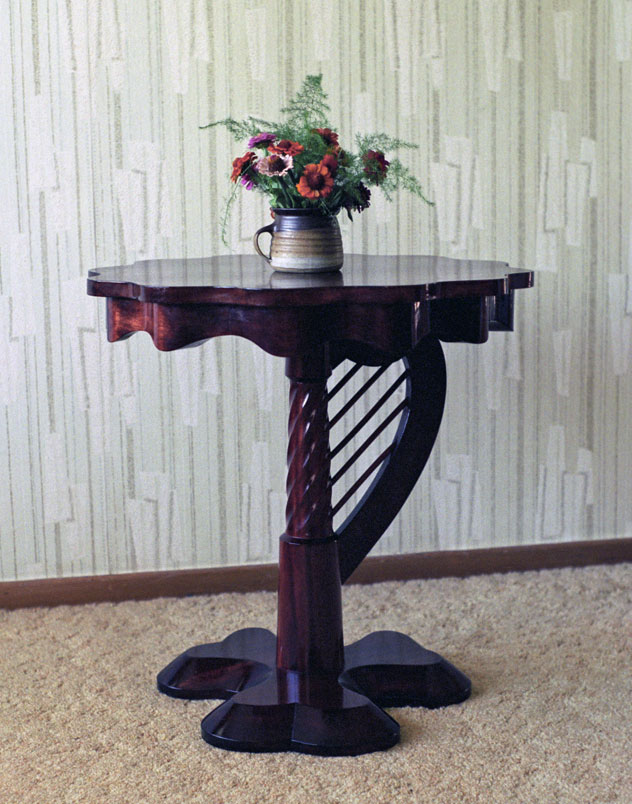 1980
Kim Webby builds his first Lever harp at home as a schoolboy for his sister Helen. At the time Helen was learning to play both Lever and Pedal harp. Right from the beginning the complexity of the pedal harp intrigued Kim and he dreamt of building them one day and to prove critics wrong who said that they could not be made in the southern hemisphere!

1981-86
Kim starts his harp making career and develops a range of Lever harps to meet the needs of harp players and teachers. Eighty eight are currently in use and are based mostly around New Zealand. The majority are his ‘Minstrel’ design which has been highly successful and they have become sought after now that he has switched focus to pedal harps. 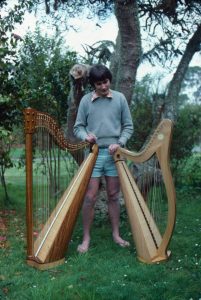 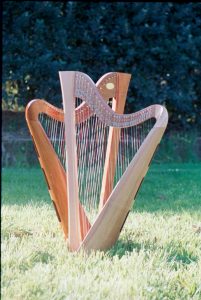 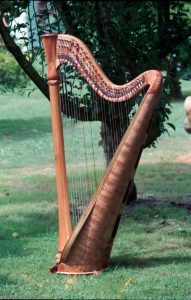 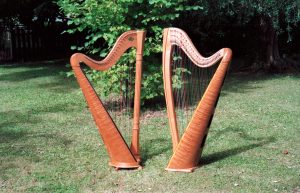 Skills learnt building and flying competition model aircraft helped with the design and construction of harps (he has represented New Zealand in two World Championships and several international contests). Mark Webby an older boatbuilding brother, helped with knowledge and sourcing of suitable timber and materials. Living in a town of boats where most people have some sort of craft for the water has proved fortunate, as so many useful products for the marine industry were easily accessible.
These harps have played an important role in the development of his pedal harps. Between 2003 and 2011 he made groups of Minstrel harps to test ideas and compare improvements before use on his larger harps, which take longer to build.
Kim’s sister, Helen Webby, regularly performs in the folk scene using a Kim Webby Minstrel harp, as a sideline to her position as Principal Harp of the Christchurch Symphony Orchestra of New Zealand. 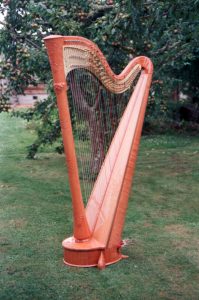 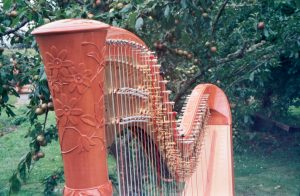 Designed as a student harp- This was very successful but too time consuming and expensive to build for the student market. As a one man maker it was clear that the full sized concert harp was the only way to go… Kim Webby enters the small circle of pedal harp makers worldwide.
Having no access to plans for pedal harps, the design was based on information he collected from the wide range of harps that had come into his workshop for repair and those of Helen’s harp teacher, Dorothea Franchi. 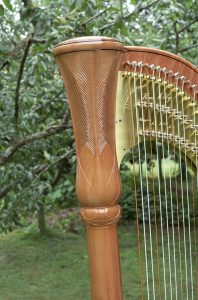 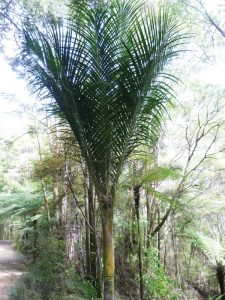 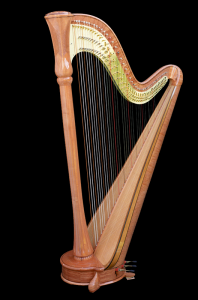 The harp was exhibited at the 1990 World Harp Congress in Paris-Sèvres – quite a feat for a young one-man maker from half a world away! It was the only place to put his harp alongside those of the ‘Makers of the World’ and to meet for the first time other harpmakers! 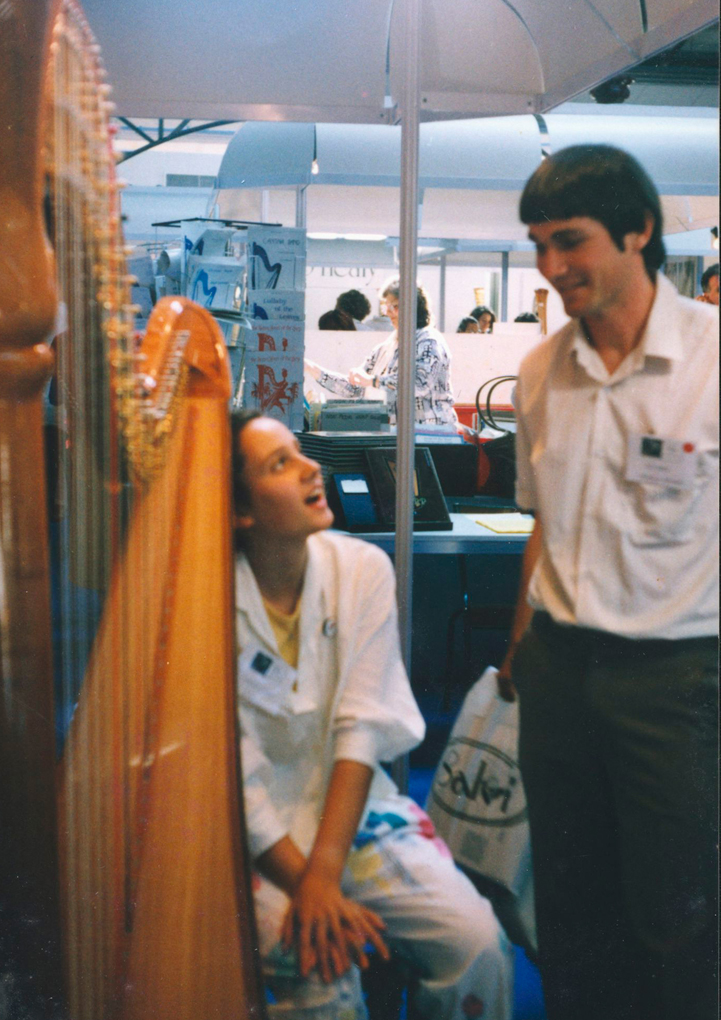 Just prior to the Paris Congress, using this harp, Carolyn Mills and Alexa Still (flute), with the New Zealand Symphony Orchestra performed the Mozart Flute and Harp Concerto in Wellington. After playing the harp for several days Carolyn fell in love with it… so the harp returned to Carolyn from Paris. Twenty six years on the harp is still sounding crystal clear and ‘fresh as a daisy’. Two more of these harps were built for European customers. 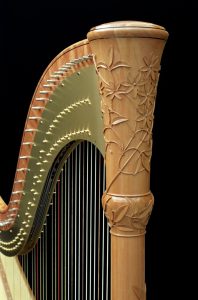 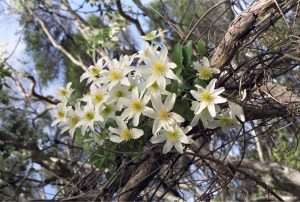 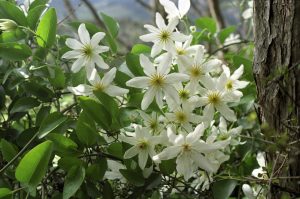 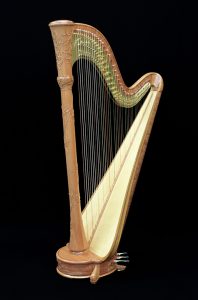 Te Huia model.  Designed in 1994 and completed in 1996. (Serial numbers 5 onwards)
Using the knowledge and experience gained with producing the first two pedal harp models, Kim Webby designed this new harp specially for his sister Helen Webby, who was at that time carrying out postgraduate studies with harp in Germany.
Te Huia has the same full length strings as the Dorothea model but with a slightly different string layout. The aim was to make it very slightly lower at the shoulder to reduce the ‘stretch’ for the player to the high strings. This required a totally new action mechanism, which is superior to previous harps.
To date four of these harps have been made with the latter three for professional players in Europe. Each of these harps takes around two years to build.
Kim Webby has decided to settle on the unique Nikau palm design which is distinctively ‘South Pacific’ in character. 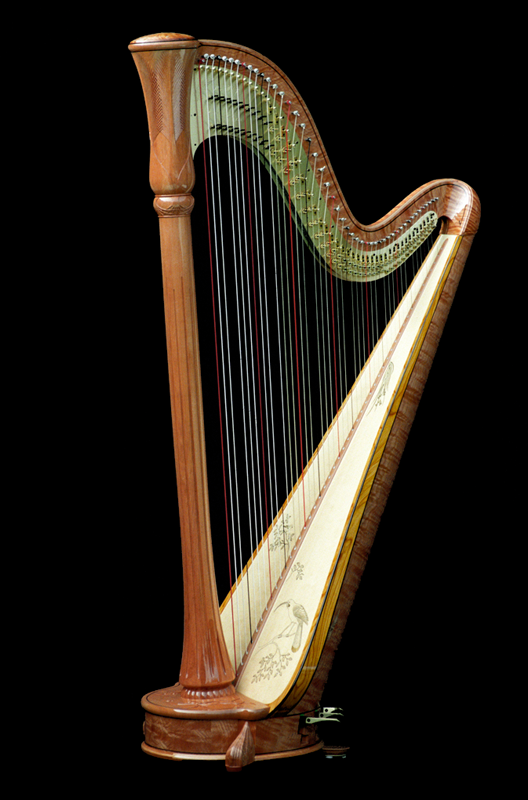 Being the first of a range, Helens number 5 Te Huia, featured uniquely New Zealand soundboard art; ink drawings embellished with gold leaf, of the beautiful and musical Huia and Grey Warbler birds on red beech tree foliage with hanging tree orchid higher on the soundboard.
This soundboard art is unique to Helen’s harp. 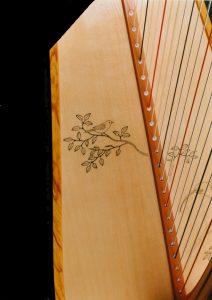 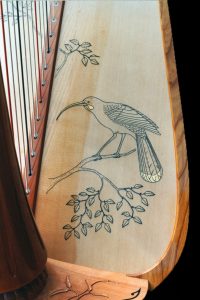 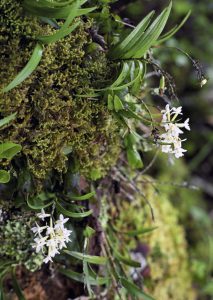 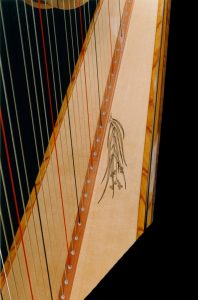 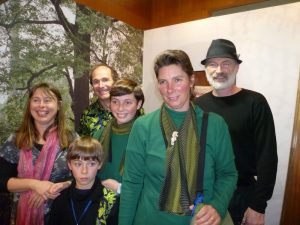 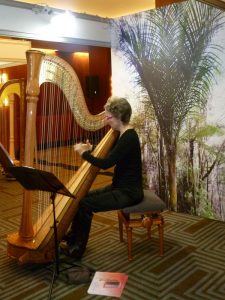 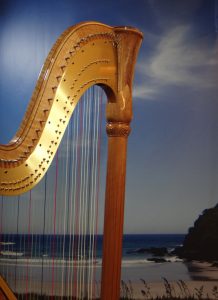 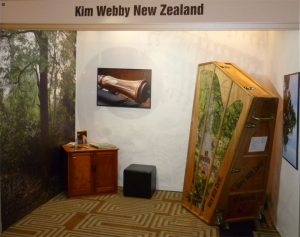 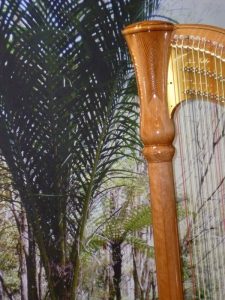 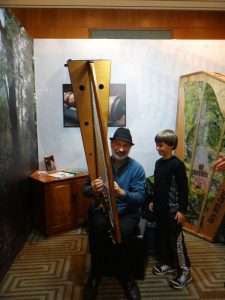 In July 2017, Kim Webby donated two weeks of technician services to assist with the 13th World Harp Congress in Hong Kong.
As part of a team of four technicians from around the world, Kim flew to Hong Kong a week before the Congress to service harps loaned by private owners and institutions for use by participants who came from all corners of the globe.
It was a very enjoyable and rewarding experience although there were many long hours in back rooms! These events are energising; catching up with friends and colleagues in the harp world, seeing the latest developments of harp makers and hearing top players of the world playing on them. 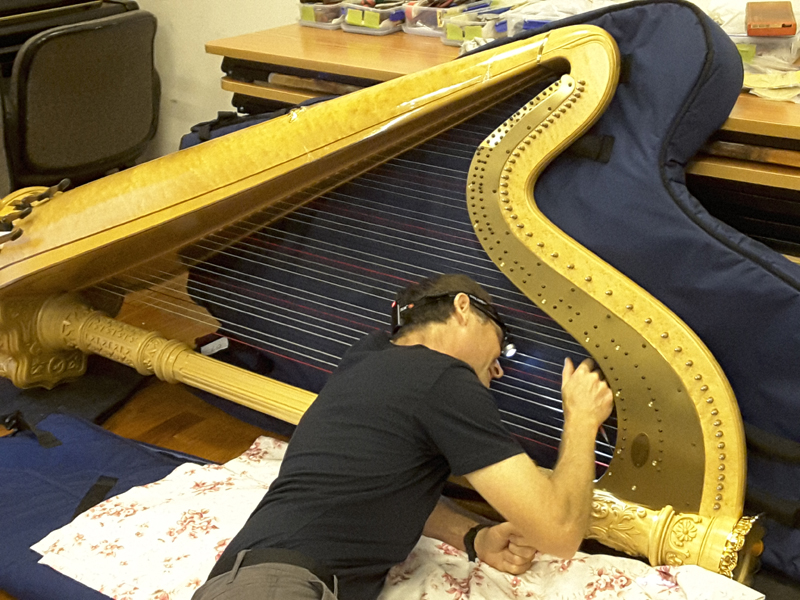 And what for the future?
More refinements to the design and an exciting new commission…! 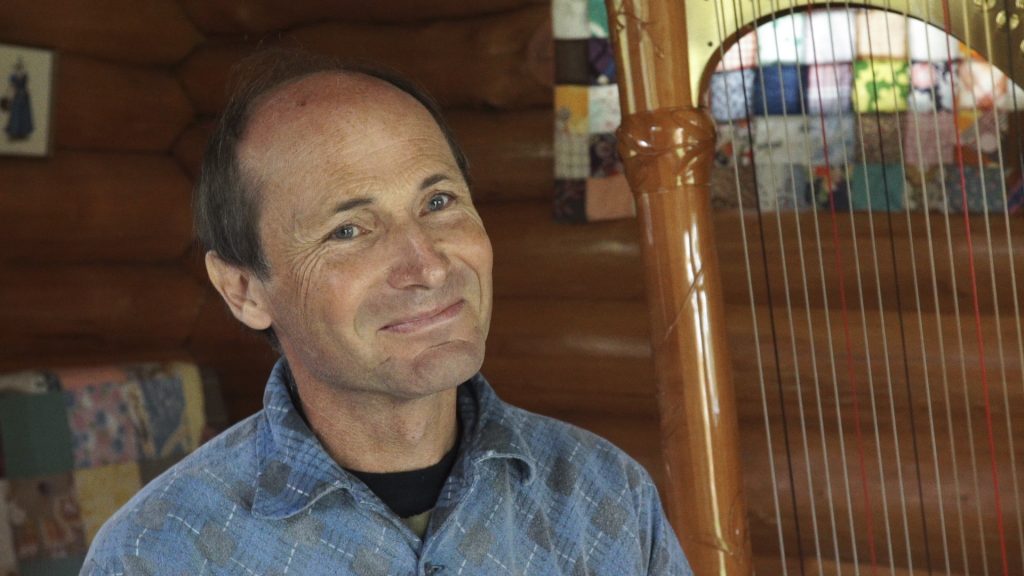 Below is a link to a video that was produced when the NZSO came to visit Kim in his workshop, outlining an initiative to raise funds for a KimWebby harp for the NZSO.